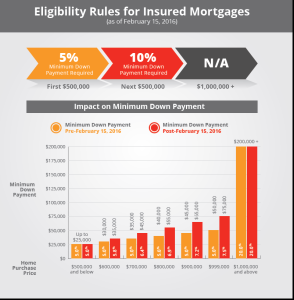 Finance Minister Bill Morneau announced these changes in December 2015. There had been a buzz around down payment increases for quite some time. And, given the alternative – increases for all high-ratio mortgage borrowers (those with less than a 20 per cent down payment) – this graduated approach will have a much smaller effect on the overall Canadian mortgage market.

These new rules mean that, for properties that cost between $500,000 and $1 million, Canadians seeking an insured mortgage will now need to put more money down – up to an additional 2.5% of the purchase price. In other words, five per cent down will be required on the first $500,000 and 10 per cent on the next $500,000.

On a $750,000 property, for instance, the new rules mean that a borrower would need a 33% larger down payment (compared to down payment rules in place prior to February 15, 2016), or another $12,500. The new rule doesn’t affect properties over $1 million because these don’t qualify for high-ratio mortgage default insurance anyway.

If your down payment is less than 20 per cent of the purchase price of the property, your mortgage must be insured against payment default by a mortgage insurer. There are three mortgage default insurers in Canada: Canada Mortgage and Housing Corporation (CMHC); Genworth Canada; and Canada Guaranty. It is typically your lender who determines which insurer is used.

Mortgage Professionals Canada (formerly CAAMP) is Canada’s national mortgage broker industry association. We recognize that Canadians need and deserve more. We believe in competition as it produces better options and demands ever-improving service and products. We believe in choice as it benefits Canadians and delivers an environment of opportunity. We believe in professionalism as it demonstrates commitment, trust and excellence. We exist to prove that the mortgage broker channel is a critical and valuable profession. It creates possibility, fuels the economy and provides Canadians with choice when making among the most important financial decisions of their lives. www.MortgageProsCan.ca.

Skip back to navigation